I went to Washington Square Park in NYC this weekend.  It was beatiful, people were playing chess games,  piano, guitar, and they were even in bathing suites sunbathing.  I guess that’s what you have to do in NYC because there aren’t really any beaches like on Long Island.  Also, what was really cool was that since it was so hot out, people were using the water fountain as a pool.  I thought that was really cool to watch, and i wanted to go in but i didn’t, next time.  As i was leaving the park i saw this thing that resembled an ice cream truck but it wasn’t it was called Cake & Shake. Cake & Shake is a new neat little invention that i had to share with all of you.  You can get an ice coffee or an ice tea for just $2, a shake for $5 which come in unique cool flavors.  It was so hard for me to make a decision as to what flavor to try because they all looked equally enticing. I ended up making a great decision, the huckleberry which is blueberry and it’s delicious. Cake & Shake offers 20 Cupcake flavors and 8 Shake flavors!  They  feature 5 Cupcakes and 3 Shakes daily which rotate often on our carts.   They first opened in June of this year and they are doing so well that they are going to open up there second location at the MET on September 2, 2010, and at the MET Cart,  they will offer 2 Savory Cake options per day.  You have to check this place out next time your in Washington Square Park or at the MET.  For now take a look at there menu and imagine the how yummy there cupcakes taste and how refreshing their milkshakes are. Did i mention there organic too! It’s awesome. Goodbye ice cream man, hello Cake & Shake !!

Who’s hungry? I have been on a mission to learn how to cook.  I tried grilling London broil the other night and it turned out so good i had to share it with you.  All i did was marinate the steak for a half hour in Lawrys signature steakhouse marinade. Then I grilled it for about five minutes on each side.  (it was about 2lbs) I like it medium rare, so I really tried to not overcook it and I am so proud of myself for not doing that. It turned out so juicy, not tough, just mouth watering delicious. Then to go with it I made mushrooms marinated in butter and Worcestershire sauce and butter. So simple yet so good! For a vegetable I steamed spinach.  I bought a package of spinach leaves from the produce isle. I then took half the bag of spinach and put it in a big pot, cooked it for about one minute. Add about a teaspoon of water but that’s it because the spinach naturally produces water when it’s cooked. Then I put it in a steamer and let it steam for about a minute and then it was ready. It was a nice flavor to have next to the mushrooms and steak. It was fresh, and healthy tasting. The perfect touch to my fabulous dinner for two. I didn’t even know I had it in me. I really enjoy cooking on the grill because the flavor the grill gives is so good. I am going to try cooking all different things this summer. I’ll be sharing them with you, the successes and the not so successful ones. So come check back here for the latest recipes, and please share some of yours I need help with some more ideas. Thanks. 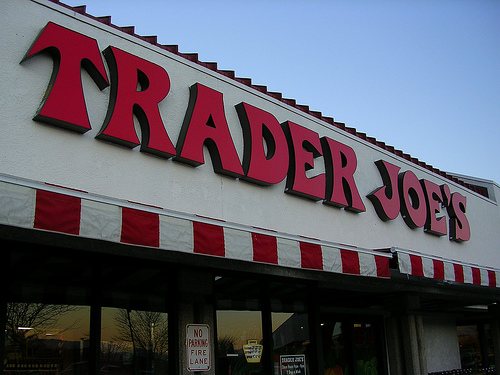 Trader Joe’s! It’s is a private grocery store and It’s uniquely fabulous!
How did it all start?
Joe Coulombe founded trader Joe’s in the year 1958 in the Greater Los Angeles area. Since then they have grown and now there are 319 stores, as of March 2009.
Interesting fact about their products:
Their products include food and beverages, basics like milk, bread, and butter, to more exotic fare like imported cheeses, organic produce, vegetarian foods, unusual frozen foods, imported wine and beer, and hand-tossed pizza. They also have non-food items which include personal hygiene products, household cleaners, vitamins, pet food, plants, and flowers.
At Trader Joe’s you’ll find a lot of unconventional and interesting products. They buy products that they think are winners for their customers. Sometimes they buy products that they intent to stock as well as sell, and other times they buy a product which is in limited supply, sell through it, and you won’t find it again.
Is it expensive?
There are no coupons, no membership cards, and no discounts. You won’t find any promotions or coupons in the store. Instead of having coupons they say they don’t need them because their prices are already low.
Where are they at?
Trader Joe’s is located in Northern and Southern California, with the highest number of stores being in Southern California. They are also located in Delaware, Pennsylvania, District of Columbia, Maryland, Connecticut, Rhode Island, Massachusetts, New Jersey, New York, Virginia, Arizona, Georgia, Illinois, Indiana, Michigan, Minnesota, Nevada, Missouri, New Mexico, Oregon, Ohio, Washington, North Carolina, Tennessee, and Wisconsin.
New York the locations include, Brooklyn, Queens, Larchmont, Oceanside, Merrick, Commack, Hartsdale, Union Square Grocery and Union Square Wine in NYC, Queens, Searsdale, Hewlett, and Lake Grove.

Have you been to Trader Joe’s? What kind of stuff do you buy there?